​
I'm Annie, the resident Content Manager. I've got some exciting news today: we're here with some information about the upcoming release!

Release will take place on Saturday, 24th August 2019, at 2PM EST.​
To see what this translates to in your timezone, click here.​
​
Seasons will most likely last up to 6 months, depending on the progression of the server.​
There will be a grace period of 7 days from SOTW, where explosions will not break blocks. Use this time to build up your defences!​
​
Please make sure to read all of our rules before you start playing!​

Here is a brief overview of features that we'll be featuring on our server on-launch:​
​
We'll also be explaining each of these features below, so do keep reading if any of these tickle your fancy!​
​
​

Complete with commissioned lore written by experienced writers, our network focuses on giving you guys not only an thrilling and fun experience, but also a gorgeous, immersive one. Our server hub is perhaps the best example of this: what better way to get across the exhilarating feeling of being lost in the infinite, ravenous beauty of space... than recreating it?​
​

​
​
And on Earth, where Factions will take place, one can enjoy the peace of the formerly Terran planet, healing under the overgrowth. All players will start in a crumbling city that has become the landing grounds of all aspiring Factioners. Various NPCs have also made the city their home, offering various services and quests if you take the time to explore and find them.​
​ 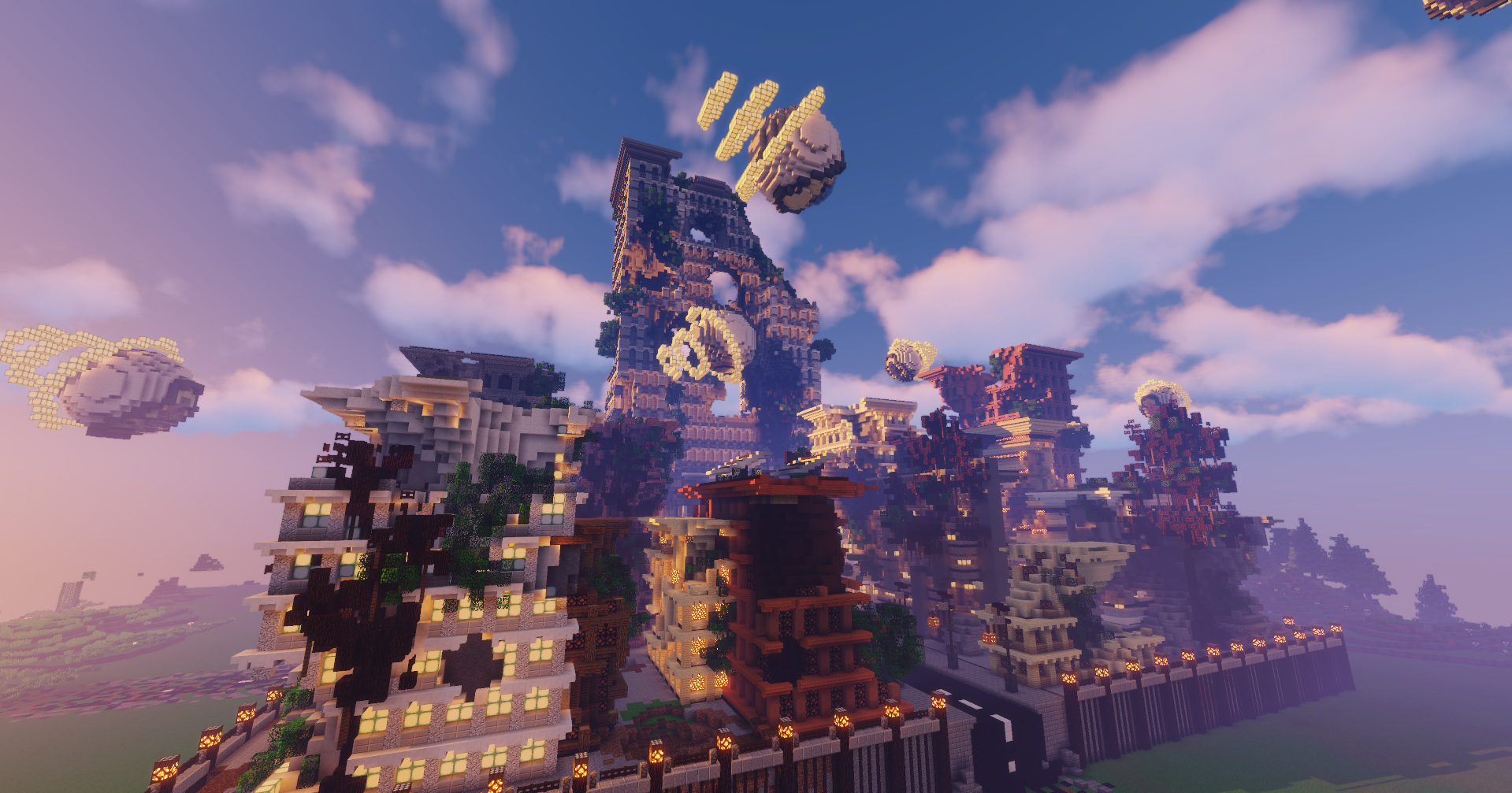 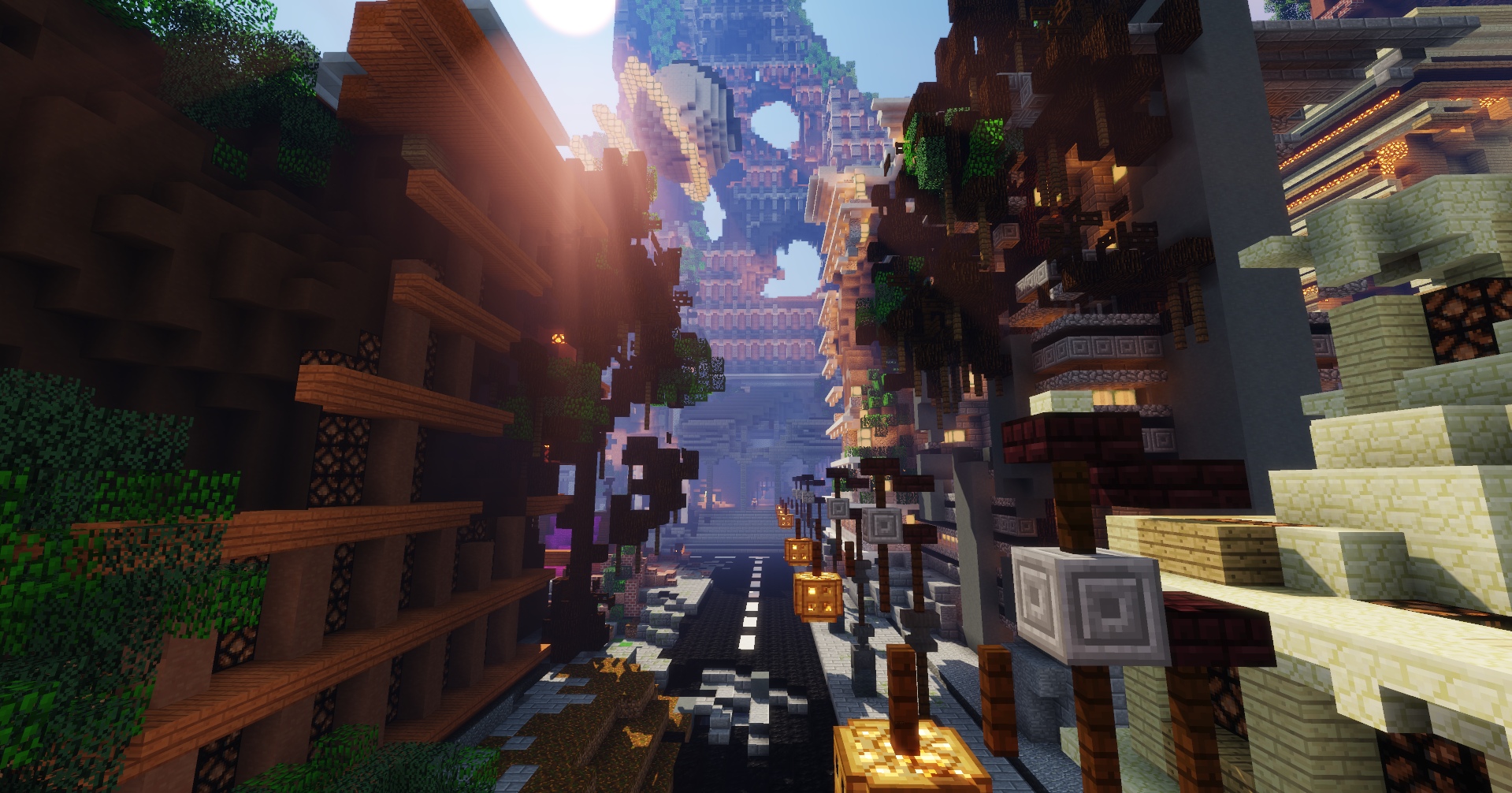 ​
However, it's not all peace and quiet in Earth's orbit! Up in space, various monsters are attempting to launch an attack on the planet. It'll be up to all the Factions on Earth to stop them - but that's for another bullet point! ​
​
> SPECIES CLASSES

One of our biggest new custom features is the Species system, which boasts 4 original classes that players can choose from, to gain passive boosts and special abilities as they level up their Species rank up to 9 times.​
​

​
Each species has 3 skill trees, boasting 6 skills each. You'll have enough points to receive 9 points -- that's enough to fill out 1 full tree and 1/2 of a second, to make some interesting combinations. More information on Species can read [here].​
​

​
The resilient Terrans, the savage Zaiyou, the crafty Macros and the mystical Sirens: each have their place and roles in a powerful Faction -- which title will you choose to bear?​
​
​
> BOSSES

Mother Nature has a funny way of going about things, and the time she's spent without humans, she's used to create... other things. Greatly enhanced monsters will seek to destroy the peace of the planet, and it's the job of all the factions on Earth to stop them. These bosses will spawn regularly at /moon, at which all players will be alerted. The top three damage-dealers of the boss will receive exclusive loot, their armor sets, and premium items like crate keys.​
​ 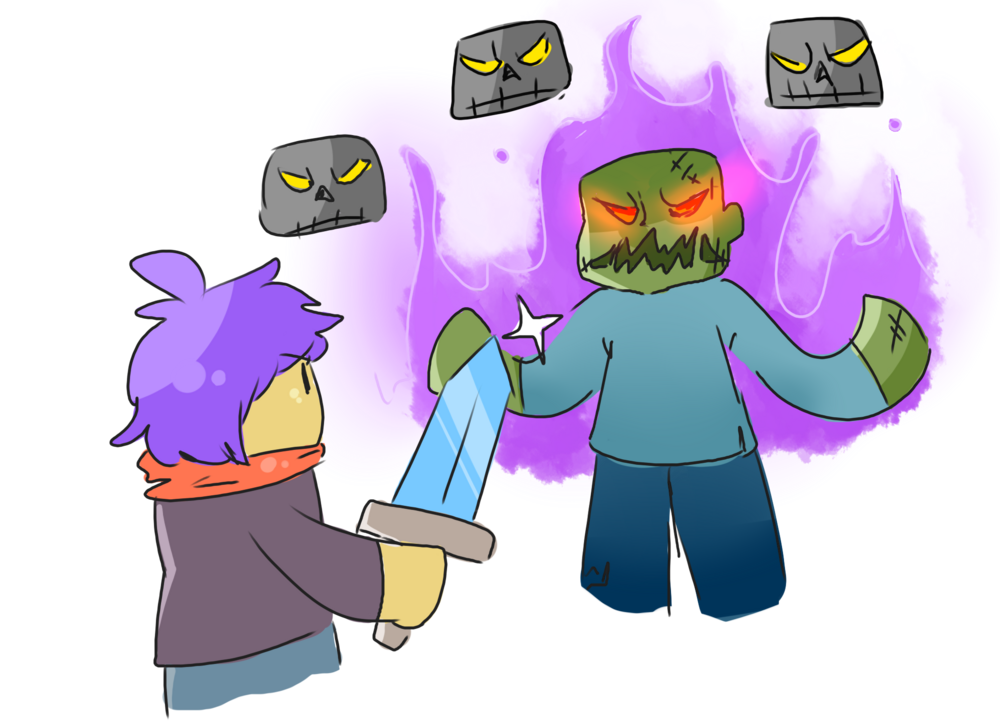 To make matters worse, Bosses aren't the only things trying to destroy Earth. Waves of vicious monsters also stand a chance to spawn at /moon. Each horde stands a chance to have the following mutations: Giant, Deadly, Venomous, Swift, Demonic, Regenerating, Diseased, Sluggish, Forceful and Dazzling -- giving them special effects and making them especially dangerous.​
​
All horde monsters are stronger and tankier than their vanilla counterparts, and drop much more loot -- including the rare resource, Stardust.​
​

The shiny, the exquisite, the reason why you're here on Earth fighting tooth and claw (but that's a bit of a spoiler for our lore!) Stardust is an extremely rare material, scattered across the universe after the conclusion of the Intergalactic War. Various mobs have various stardust droprates, but Witches drop the most at a 2% chance.​
​

​
You can harvest it from slain monsters, hordes and bosses, and use it to trade for extremely rare and/or premium items at the /stardust shop, including crates, shipments, random / exclusive custom spawners, Galaxy tools, wands, Spacepod Flares and even a server-wide Vote Party!​
​ 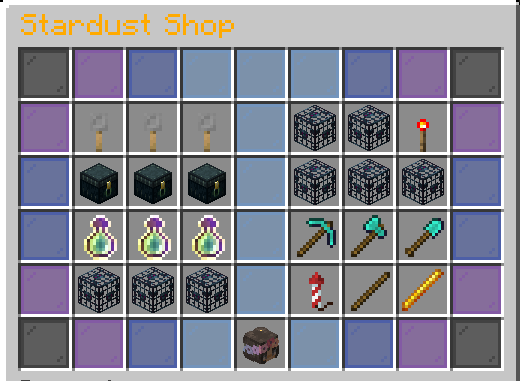 Stardust didn't just find its way into the bodies of monsters across the galaxy, but also into items. Search the land for the Stardust tools - these tools and weapons are scattered across the world, buried randomly under the flourishing overgrowth.​

​
These pieces of equipment are enchanted more powerfully than anything a moral could conceivably forge, undoubtedly becoming the most sought-after treasure upon being unearthed... and their finders, the most wanted targets in the galaxy.​
​
​
> GALAXY MISSIONS

One of the last (but not least!) features we wanted to share with you is Galaxy Missions! Galaxy Missions are quests that refresh every week, but there's a catch. They're impossible to complete... on your own.​
​
The server must work together and tally their numbers to complete these missions to earn planet-wide rewards and sometimes even bonuses for the entire season! For those who aren't fond of the whole working-together-deal in Factions, don't worry. Most missions are additive quests, like "mine X blocks!" which are non-intrusive and stuff you'll have to do anyway during your gameplay.​
​

​
Plus, the top three contributors of each weekly Mission get a little something extra for their efforts, so it's, for all intents and purposes, still a good old competition.​
​
​
> SPACEPOD ENVOYS

There are some very rich folk out there in space who enjoy watching the Factions compete against each other - it's much better than TV. To support your efforts, they've been raining down some fancy and expensive loot in pods. Watch the skies, as these spacepods land every two hours around spawn city.​
​

King of the Hill events - or KOTHs for short - are daily activies in which factions try and capture a point of interest by staying on it for 15 minutes without getting knocked off. If a point isn't captured for too long, the time starts getting reduced, down to a minimum of 5 minutes - just in case KOTH is getting too crowded and people are getting knocked around too much.​
​ 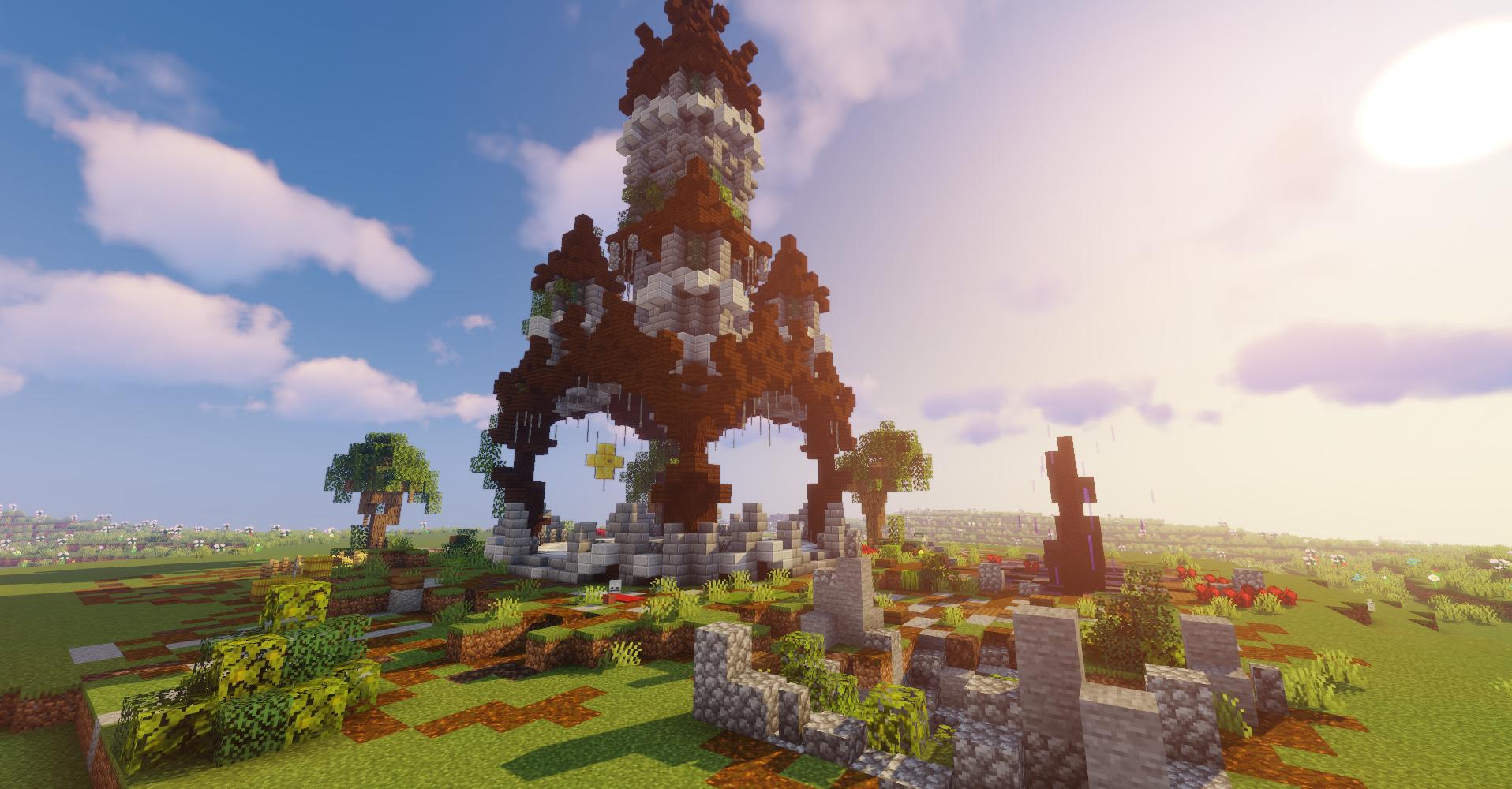 ​
KOTH winners receive up to 10 KOTH Crates, which exclusively contain KOTH armor and tier 3-5 crate keys; so it's certainly worth going to if your faction wants some free crates!​
​
​
> GENERAL FACTION FEATURES

These are some features that every Faction veteran probably already understands - but don't worry if you're new to the scene, we'll briefly cover it anyway.​ 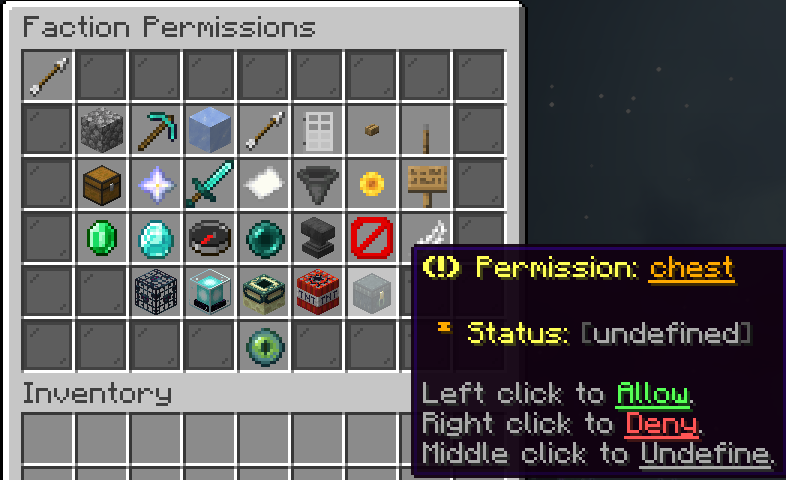 More updates will bring more content -- and we sure do promise a lot of them. In fact, we've already got plans for a cool event for our next class release - complete with a few free Species-Change modules to be given out, so stay tuned! This is, however, the extent of exclusive features we have planned for our release.​
​
A lot of time and effort was put into the construction of this server, and we believe that we're taking a large first step in the uncharted territory of immersion, environment and RPG-Factions in Minecraft. Thank you very much for your interest in our project, and for your patience. We hope to see you around in a few days!​
​
​
~Annie, Content Manager​
​
​
Last edited by a moderator: Aug 24, 2019